Here’s why I don’t burn bridges…or throw my candy in the sand…or whatever cliché analogy for getting pissed over a rejection or being mad at an editor for rejecting a piece that you may want to insert here…there’s always hope for a story. You may place it elsewhere, an editor may come back later and ask you for it for the very same project or another one down the line…and I’ve done this…quite recently. Or! That editor may recommend it or you to another editor or publisher that’s a better fit. In any case, a rejection is not always the end of the line.

Luckily, I’ve been in the (biz? game?) long enough to pretty much know the ins and outs. Starting out, when I wrote that one story that a classmate or my cousin or someone told me was great and I shopped it around everywhere, not checking the market, not really paying attention to the theme, word count requirements, etc. and was pissed all the way off when it got rejected again and again, I was finally lucky enough to receive a few words from an editor who took the time out to tell me what I was doing wrong.

But more than that, I realized that I shouldn’t have taken it so personally. And I’ve written this blog post before, more than once, but it’s worth repeating.

I’ve received rejection letters that were so informative, warm and helpful that I wanted to frame them. And I’ve received simple “I can’t use it” or the worst of them all, rejection by way of no response. But, I move on. I move on simply because (and just as I approach life stresses), if I let it all get to me, I would be just a shell of who I am. It would eat away at me and I would question everything and probably tuck tail and quit. And I wouldn’t want that for anyone, for any reason.

I really came here to say that a story of mine that wasn’t accepted a while back (so long ago that I forgot I even wrote the story) was just requested to be included in an upcoming anthology. I hadn’t done anything else with the piece because, like I said, I had forgotten all about it, so I happily said yes.

And I know, my breaking of this news went kind of left what with me having just wrapped up my own anthology and really wanting to just say in general (even though over 100 authors took the news awesomely), chin up. This ain’t the end.

You might have heard me mention here and there the completely out of the blue conversations I have with people (more accurately, they with me) about sex. I don’t always talk about it, but I do often document it -letting them know I’m doing so of course. And I do it because I find that these random tidbits work great in my stories. Today was a great example.

I was talking to a friend about her no-strings relationship and she mentioned that it seems like the guy is getting more attached than she. The thing she said that really stood out?

“I bring my pussy to this relationship, not my heart.”

And yes, I wrote it down. Short story in progress.

So, I turned in a book yesterday. Wait, didn’t I say that three and a half months ago? Well, yes I did, and yes…I did. The production editor came back with beta reader feedback and some suggestions, so for the past couple of weeks I’ve been reworking, revising, and revisiting (hence my last minute call for more Can’t Get Enough stories). The good thing was, my word count was getting expanded. The not-so-good part was we had to cut a couple of the original stories. And trust me, I hated to pass on that news because as someone who’s been cut twice (maybe more?) at the publishers, I know how that can feel.

But! In good news, I was able to replace those with some stories I had originally rejected due to spacing and flow issues, so I was happy to go groveling back asking for those stories, and happy those authors still had them available and were willing to let us publish them. I also received two more that were the perfect fit and the publishers loved and after much fretting and fitful sleep, I turned it in (again) and we’re all set to go.

And then I finished and turned in a story for someone else’s collection. And I’ve started another. While I love editing and am so excited about Can’t Get Enough, I am so happy to be on the creative side of things again. I’m giddy about creating little worlds to escape to because, the gods know I need that escape every now and again.

I saw yesterday that awesome writer and editor Rachel Kramer Bussel posted an excerpt of my story Brenda’s Booty on her Lusty Lady Blog. I really like the section she chose to highlight and actually, I’m really fond of this story overall. The main character, Brenda, is feisty, and she meets her match in ass admirer Lewis.

Baby Got Back is available for pre-order from Amazon, but you can check my little snippet out now.

Very little people in my life (who aren’t immediately related or really close friends) know that I write, and especially what I write. When people learn this information, be it hearing it from someone else or (Gasp!) opening a book and seeing my name and bio, they always seem surprised. I could venture to guess the reason why this sort of news would shock them – I’m a quiet wife who works nine to five, loves to cook and dotes on her two children – but I never ask why.

It’s so funny, though, when I actually engage in the conversation, and even better when I offer to bring the person something of mine to read. It happened today because of this new tattoo: 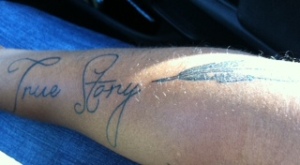 It was all I could do not to fall out laughing, but we were at work and I kept it together. Then he said, “I like to read, too, you know. You ought to show me your stuff.”

I’ll let you know soon if it’s right or wrong.